5 Raleigh Neighborhoods Where Rent is Increasing the Most 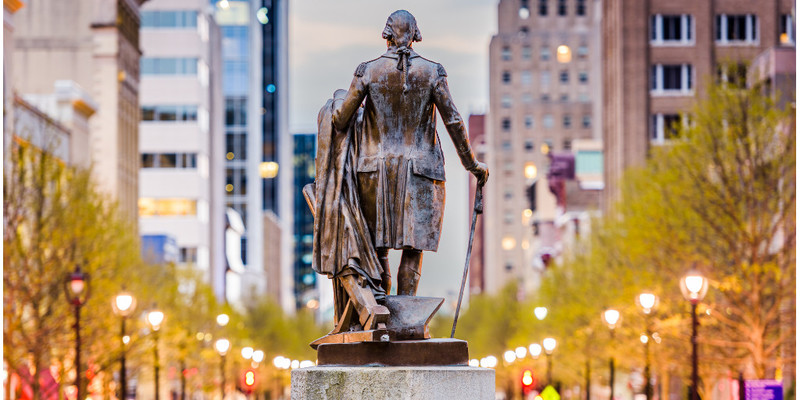 Known for its serene environment and being one of the leading technology hubs in the United States, the City of Raleigh hosts a cluster of renowned research centers and universities. The city experiences the influx of more people seeking greener pastures every day. So, it’s no surprise to come across people seeking property rental in Raleigh.

The beautiful parks and streets of Raleigh featured in several movies and photoshoots. Who wouldn’t love the stunning sight of the well-nourished Oak trees that line the streets of Raleigh and from which the city derived its nickname – ‘City of Oaks’?

With an interesting array of friendly neighborhood having various attractive facilities, you’ll find rent varying significantly among the neighborhoods. Therefore, knowing the Raleigh neighborhoods where rent is increasing could come in handy in your search for a perfect neighborhood in Raleigh.

Raleigh’s cost of living is 6% above the national average but some of the city’s good sides include the sales tax that is 7% lower than the national average and the relatively low rent and gas prices. Below are the top 5 Raleigh neighborhoods where rent is increasing the most. 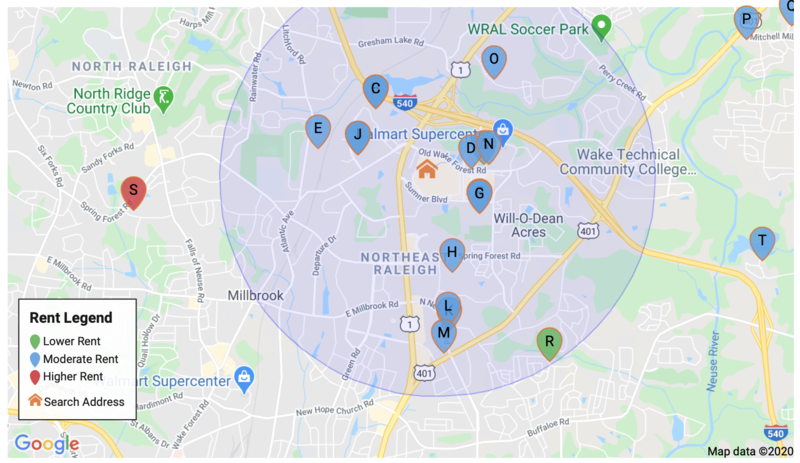 Triangle Town Center is situated on the northeastern side of Raleigh and it is home to its namesake, state of the art shopping mall and two other shopping areas – Capital Crossing and Plantation Point. Thus, it can be referred to as a shopping district and this explains why it is considered one of the most alluring neighborhoods in Raleigh.

The neighborhood is one with a beautiful landscape and it has 18 schools including 6 elementary schools, 4 middle schools, 4 high schools and 4 private and charter schools. This makes it suitable for a nuclear family with little kids and even teenagers.

As is obvious from its earlier description as a shopping district, there is a slew of restaurants, a neighborhood park known as Spring Forest Road Park with the luster of a tennis court and sports fields.

Another distinctively attractive feature of the neighborhood is that it’s not one you would call sprawling. It’s only about seven miles from Downtown Raleigh and it’s a short drive from landmark places such as The North Carolina Museum of Art making it a great location for commuters.

These prices are clearly increasing as these prices were generated by median calculations over the last 12 months. This would mean a prospective renter needs to be the one that rakes in as much as 20,000$- 60,000$ in yearly earnings. 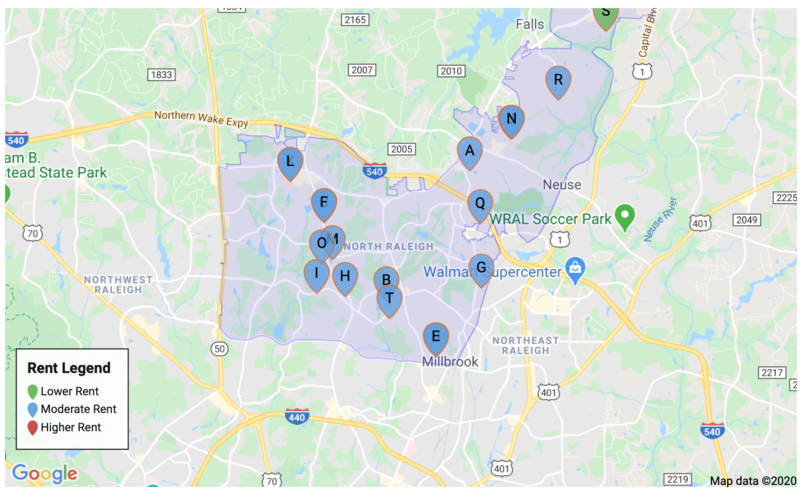 North Raleigh is a scenic neighborhood in Raleigh and a perfect place to start a new life, whether early in adult life or as a retiree. It’s distinguishing feature is the enormous home lots, picturesque rolling hills and the obtrusive oak trees. It is located roughly 8 miles north of Downtown Raleigh and is home to an increasing number of exquisite residences.

There’s an array of house options from houses built in the 60s and 70s to newer ones, making it a desirable neighborhood for prospective residents. It’s also situated in a generally suburban environment and it’s consequently home to a variety of grocery stores, shopping centers, and restaurants.

North Raleigh is also proximate to the best schools in Raleigh putting to rest, the fears of parents with kids who are in middle school or in high school. It’s also a perfect location for commuters and there is unfettered access to all the exciting things about Raleigh whilst it’s subtly detached from the city's hustle and bustle making it one of the most convenient and serene neighborhoods in the city.

This would mean prospective renters should earn as much as 20,000$ - 70,000$ annually depending on the size and residential benefits keeping in mind that the rents increase with time. However, there are cheap rental apartments in North Raleigh that costs as low as 750$- 900$. 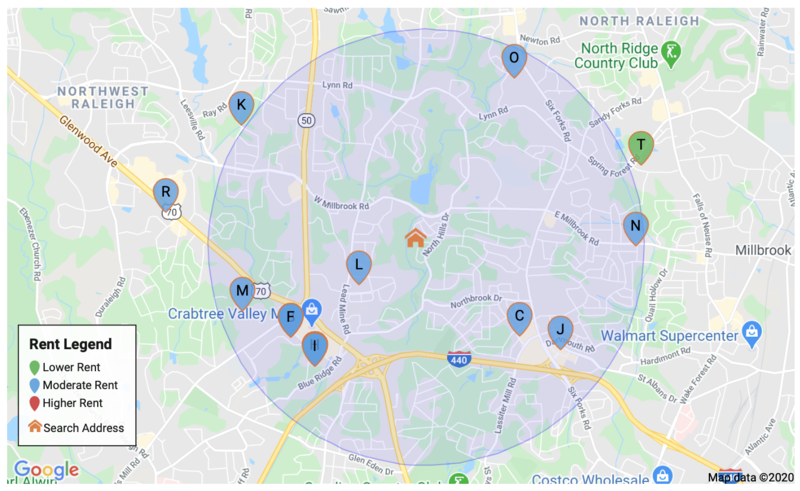 North Hills is in Northern Raleigh and is notably situated at about five miles away from the North Carolina University and it’s 11 miles from the Raleigh-Durham International airport, thereby making it an interestingly convenient, yet ambient neighborhood.

The neighborhood is home to the famous North Hills Shopping Center which originally opened in the 1960s as “North Hills Mall”, it evokes nostalgia in long term residents whilst its modern renovations over the years helped retain its significance.

It also has direct access and is minutes away from other exquisite shopping centers such as; The Triangle Town Center. There is an air of vivacity with the membership-based North Hills Club, featuring recreational activities and the North Hills Park which features playgrounds and walking trails.

There is also an inundation of golf courses for golf enthusiasts. The restaurants are exceptional and diverse, offering fast foods, the much-adored Italian cuisine, desserts and so much more. An increasing number of businesses have begun operations in North Hills, it’s first large tower is known as the Captrust Tower; home to different companies and firms and there are ongoing plans to build more towers to accommodate more businesses and create employment opportunities.

One of the most distinguishing features of North Hills is its urban setting, despite not being located in the downtown district. It’s also surrounded by top schools in the country, including North Carolina State University, Duke University and the University of North Carolina. 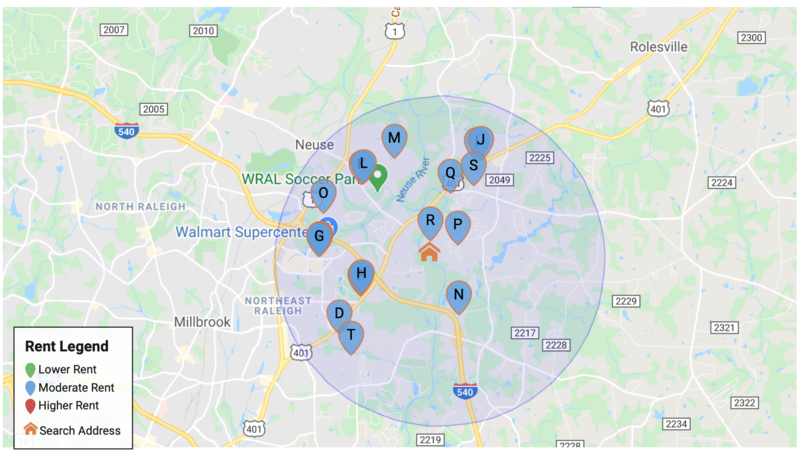 Forestville is one of the most popular neighborhoods in Raleigh with incredible housing options. It’s commonly known as Forestville Farms, located near Wake County. It’s very important to note that a prospective resident of Forestville will want to have a car as the majority of Forestville residents get around by car.

Its home to 16 schools, including 5 elementary schools, 5 middle schools and 4 high schools with 2 private and charter schools – making it convenient to raise a family. It also has a notably low crime rate.

Rental apartments in Forestville like other neighborhoods vary from studios to three bedded apartments. Forestville apartments have prices ranging from 915$ to 2500$ per month and a renter should earn as much as 20,000$ to 60,000$ depending on the apartment’s size, outlook, and interior furnishings. 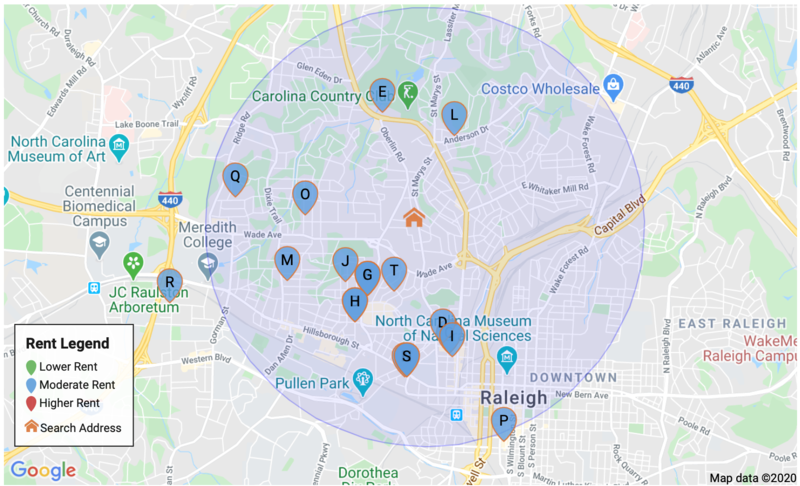 Hayes Barton neighborhood is a great place to raise a family of blossoming kids as it boasts of 5 schools including 3 elementary schools, 1 middle school and 1 high school with no private and charter schools. Notwithstanding the seemingly low number of schools, the schools are all above average and well-rated within the state of North Carolina.

It’s also home to several businesses, including splendorous restaurants and it’s a good choice for recreational purposes, given its closeness to the Cameron Village and several recreational parks. It also has a gorgeous landscape and many of the homes have modern designs.

Although it’s largely an upper-class community, it’s also home to a number of middle-class families. There are tons of wide spaces and beautiful trees giving it an air of pomp and pageantry.

As a largely upper-class community, many of the houses are self-owned. However, there are quite a number of apartments available for rent ranging from studios to three bedded apartments. The apartments have a price range of about 950$ - 2500$ depending on the size, outlook and interior adornments. The prices are never static and they increase every day.

Neighborhoods in Raleigh, North Carolina are commonly gorgeous, convenient and suitable for prospective residents. They, however, require a certain level of economic stability to keep up with, especially with their ever-increasing prices.

If you're in the Raleigh area, don't forget to use a great tool like Rentometer to analyze rent prices and make better decisions for your real estate business.