Understanding the Rental Market in Philadelphia 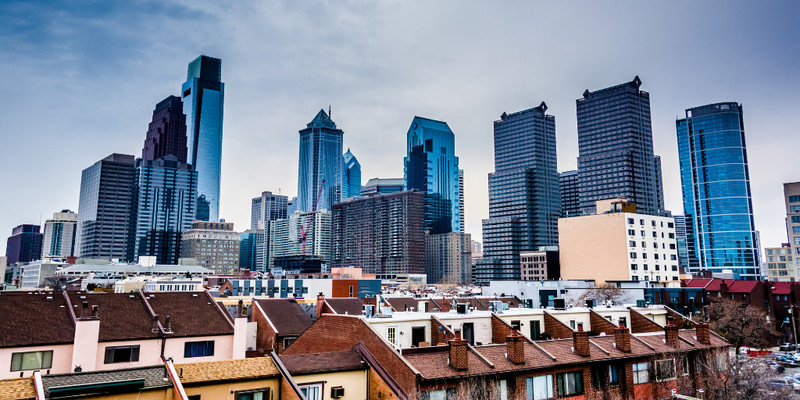 The city of brotherly love is one of the most expensive places to rent in the U.S. Last year, in line with the national trends, Philly's median home value and rent rose by a couple of points, while the number of available home inventory fell. Nevertheless, in previous years the surge of property prices in Philly outpaced the national average, while last year numbers are signaling certain slow-down in the rent price dynamics. Before diving deeper into the intricacies of local politics, it is important to understand the factors that propel this growth.

Population dynamics is one of the critical factors that influence Philadelphia's real estate market. Philly is the 6th most populous city after New York, LA, Chicago, Houston, and Phoenix. The population growth is exceeding the national average due to the strong out-of-state migration stimulated by a strong economy and rising demand for the qualified workforce. In large part, this influx is the renters' population. Philly has the 3rd largest student population on the East Coast, meaning that thousands of students, recent graduates, and young professionals are entering the rental market.

The health of the local economy is another factor that influences the surging rent prices. The city’s economy is thoroughly diversified, and the crisis in one sector can be balanced out by other dynamic industries. The backbone of Philly’s economy is tourism, manufacturing, oil refining, telecommunication, banking, biotechnology research, and, of course, education. Those industries supply the city with thousands of above-average paying jobs.

According to AMP Research Lab Marketplace, since the Recession, Philadelphia witnessed the surge in renting, significantly outperforming the national average and major metropolitan areas. From 2006 to 2016, the percent of households that choose to rent increased by 42%. It is commonly attributed to the burst of the housing bubble, and more restrictive laws on mortgage lending. Many homeowners lost their properties to foreclosure, while mid-level professionals were not able to afford to buy. In addition, many young graduates entered the workforce at the worst possible time since the Great Depression. This caused a significant shift in mentality, where many households transitioned from owning to renting or at least significantly delayed the purchase of their first property. The real estate of Philadelphia responded to this shift, with more build-to-rent properties and buildings with apartments for rent, substantially increasing the renting inventory. Currently, about 49% of local residents are renting.

The gradual climb of rental prices in Philadelphia recently stopped due to the rising inventory of rental housing units and a stable economy that encouraged young households for homeownership. However, it does not result in a significant rent decline. The city struggles with some of the lowest numbers of for-sale homes on record. In October 2019, only 3,926 single-family homes were put on sale, and more than 1,000 were purchased. The prospective buyers face fierce competition and struggle to find the desired property. This shortage will be further aggravated by high-income prices, gentrifying city center with a growing population, and growing numbers of investor owners that turn single-family homes into rental properties. This low inventory signifies less mobility since it makes trade-offs and downsizing harder. It makes it more difficult for Philadelphia renters to become homeowners and drives the renter's competition in the upper-income brackets.

Another essential factor that stimulates rental prices is the legality of Airbnb. Philadelphia is a big tourist center, with thousands of visitors flocking the city each day to take a glimpse of the Liberty Bell or stroll around the Philadelphia Museum of Art. Many major US tourist destinations, such as New York and LA, have established strict regulations of vocational rentals, effectively banning non-owning occupied Airbnb rentals. The same cannot be said about Philadelphia, although non-owner occupied short term rentals need more special licenses and permits than owner-occupied ones. The number of tourists that visit Philadelphia is only expected to grow, encouraging many landlords to turn their property into the vacation rental, limiting the long-term rental inventory.

Another important factor that influences the price dynamics in Philadelphia is the practice called filtering, a practice when wealthy renters move into more prestigious newly-build unites, and leave behind older rentals that lost its gloss and became cheaper for those with the lower income.

It always was an important mechanism for maintaining a sufficient inventory of affordable housing in the city. Nevertheless, the spike in housing prices and the 10-year tax abatement for the rehabilitated properties substantially stalled this process. The quickly appreciating property and the strong demand for the upper-class housing in previously affordable neighborhoods, such as South Philadelphia, encouraged gentrification. The neighborhoods that previously hosted medium to low-income households became the new hip districts for young professionals, pricing out the former residents.

This piece of legislation profoundly affected the real estate market of Philadelphia for the last 20 years, and it is about to change, so it is worth taking a look.

The 10-year tax abatement started in the ’90s as an attempt to reinvigorate stagnating housing prices and included the system of tax breaks for existing buildings. It was amended in 2000 and expanded its coverage to the new construction and redevelopment projects. The city intended to provide incentives, increase the housing supply, and stimulate the local economy.

Under the terms of the abatement, owners of the new constructions had to pay only taxes on the land underneath the buildings for ten years, while the owners of urban redevelopment projects do not have to pay taxes on the additional value the properties gained.

For instance, Philadelphia Inquirer gives the following breakdown of the tax break for properties in Fishtown:

“A rowhouse near Frankford Avenue and Palmer Street in Fishtown that was built in 2012 has a market value of $498,600, according to the Office of Property Assessment. But the owner only pays taxes on the assigned land value of $135,942, so the annual tax bill is about $1,900 instead of almost $7,000.”

City administration was always the most forceful advocate for the prolongation of the tax abatement, praised its efficiency, and boasted that it amplified construction, and ultimately the tax revenue. However, many city activists criticize the abatement and say that it was an important anti-crisis measure in the ’90s and currently become a tax break for the wealthy, and the main driver of gentrification and pricing out low-income residents out of their neighborhoods. After the intense backlash, Mayor Jim Kenny initiated the review of the tax abatement.

Changes to the Tax Abatement

In December 2019, the Philadelphia City Council unanimously adopted the major changes to the 10 year-tax abatements. City representatives unanimously voted to reduce the tax break for the new constructions. The new law will go into effect in January 2021. The city council projects that the amendments will produce $270 million in tax revenues over the next ten years.

According to the new directives, owners of the new residential properties will pay no added value taxes during the first year, 10% during the second year, 20% during the third, the tax will gradually increase each year until the owner pays full tax for the property.

The conditions for commercial properties and rehabilitation projects remained the same. The reasoning behind it is that commercial properties create new jobs, further improving the economy, while the 10-year tax abatement for rehabilitation projects remained underutilized in many Philly’s neighborhoods, and lawmakers want to incentivize redevelopment of old Philly's property.

This move will further aggravate the problem of gentrification, as the old properties won’t be “filtered”. New rehabilitation projects will be redeveloped to cater to the city professionals on the upper-middle-income spectrum. Instead, it would be wise to direct the funds from the new property taxes toward the programs that facilitate housing affordability through the construction of low-income housing and expansion of the Housing Choice Voucher Program. 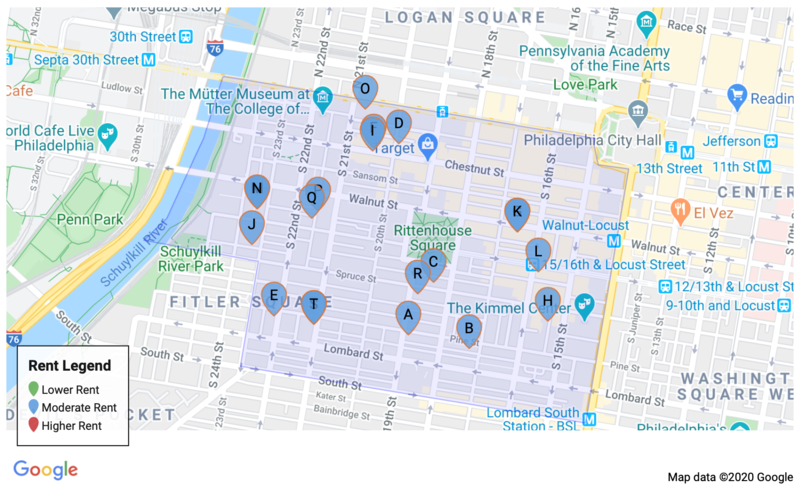 Rittenhouse Square is one of the most sought-after neighborhoods in Philadelphia, together with the University City. It is one of the five squares that was planned by the city founders. It is located right in the heart of the historic center. No wonder that rent here is one of the most expensive in Philadelphia. Together with the abundance of historic buildings and vintage apartments, there are also upscale high-rise condos and luxury apartments for rent. The picturesque Rittenhouse Park is also located in this neighborhood. It is a great place to go jogging or take a dog for a walk. 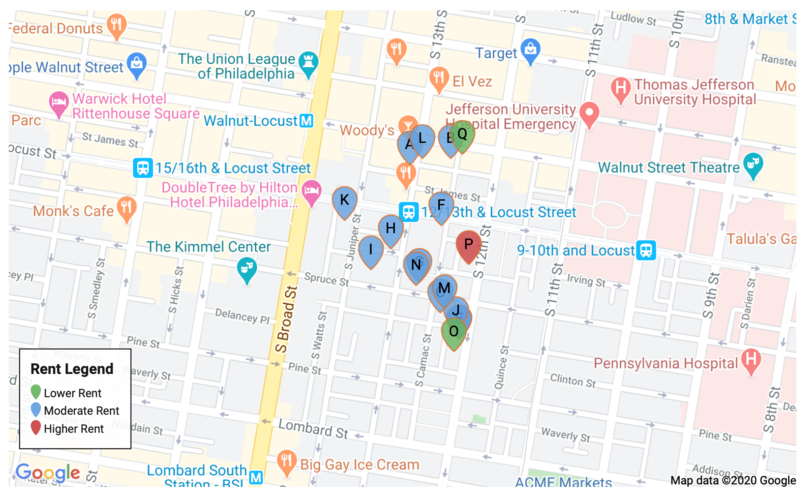 This historic neighborhood is located just a few blocks away from the City Hall and major places of interest. Gayborhood is the epicenter of the local LGBTQ community, even crosswalks here are rainbow-colored. It is filled with live-music clubs and various dance parties, fusion-cuisine restaurants and cozy pubs for all tastes. Local streets are commonplace for open-air festivals, block-parties, and artistic performances. 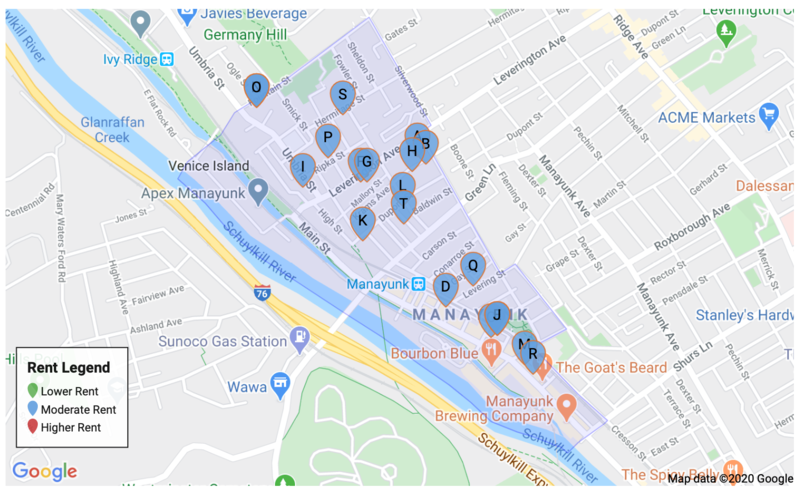 Located on the banks of Schuylkill River, this is a trendy and walkable neighborhood with a small-town vibe. It consists predominantly of rowhouses, lofts, as well as luxurious Victorian single-family homes, occupied by the long-time residents. The hilly streets of this district are the location of the annual bike race. Manayunk is a center away from the center, a stronghold of hipster culture and underground venues. The main street here is crowded with little artisanal shops, local-brand boutiques, and art galleries. Local residents also adore their waterfront and can frequently be seen strolling the banks with a whole family.

About the Author: Mykola Kryvtsun is a content marketer in Rentberry and chief editor of Rentberry Blog and Landlord Tips covering the topics of real estate, public policy, and marketing. He holds a BA in Philosophy and Chemistry from the University of South Florida, where he discovered a passion for writing and exploring hidden connections between business, politics, and technology.