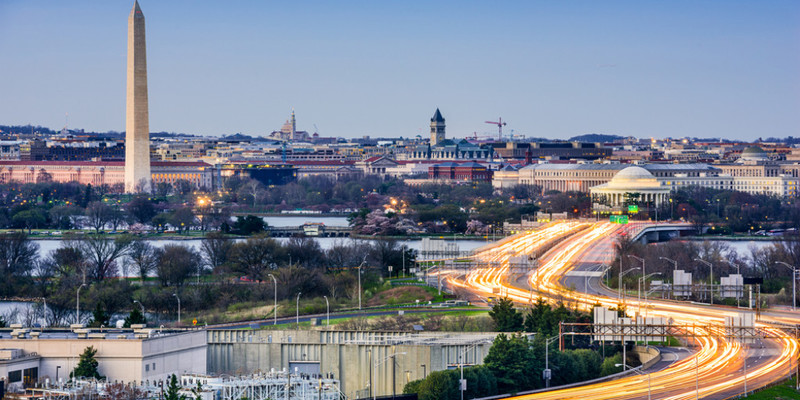 Washington, D.C. is a unique metropolitan area. In a way, it is a city-state ruled by Congress with an individual legislative agenda. It attracts young upstarts from around the country who dream about careers in consulting, lobbying, and politics. It has a booming I.T. and starts up the scene tailored for the needs of the public sector and big government contractors. No wonder that the local rental market is one of the hottest in the nation, with ever-rising demand amid high prices and low inventory. The real estate prices appreciate for three years in the row, setting a record with the median house price of ​$506,000.

According to​ Business Insider​, the federal capital has the most robust economy in the U.S. The DC area has one of the highest household incomes in the United States, with an average income of $91,000. Washington, DC, has a diversified economy with consulting, law, and business services, a robust non-profit sector with a variety of unions, professional associations, and advocacy groups. Tourism is another strong suit of the city with nearly ​24 million​ visitors each year spending around $7.8 billion dollars and generating $851 million dollars in tax revenue.

The business sector is less prominent in D.C., but there is a high concentration of big business in the metro area. Several Fortune 500 companies setted up their headquarters in the city of Rosslyn right across the Potomac river to stay close to the decision-making center of the nation. The DC height restriction prevented them from building large H.Q.s in the city, so they decided to camp out on the other side of the river. In 2020, Amazon is planning to ​start construction of its second H.Q. in the Crystal City neighborhood of Arlington, part of the​ D.C. metro area connected to Washington metro rail. Amazon vouched to invest nearly $5 billions and construct housing for 50,000 of its workers. D.C.'s real estate sector will undoubtedly benefit from these infrastructural investments. With such massive redevelopments on the way, you can be confident that D.C. properties will continue to appreciate and rent prices surge.

According to even the most pessimistic projections, the Washington D.C. rental market will experience high demand in 2020. According to PwC's Emerging Trends in Real Estate report, D.C. and Northern Virginia perform the best out of all high-cost markets​ and exhibit strong buyer tendencies. It is a favorable environment for homebuilders and redevelopment projects. Nearly 61​% are renting their residence, which creates an​ insatiable demand for the apartments.

Furthermore, Washington D.C. displays a positive population growth rate due to interstate migration. The city has an over-performing job market with high demand for a qualified workforce. It is ranked 5​th best city for young professionals.​ Low-rise multifamily properties are the most popular among the renters' population of D.C.

In light of surging housing prices, the city council introduced initiatives to keep housing affordable and implemented harsh rules​ for vacation rental. In DC, non-owner occupied​ properties are forbidden to be used as Airbnb rentals. Property investors are banned from using their second and third properties for short-term renting to tourists. Airbnb hosts in D.C. are allowed to rent only a portion of their primary residence, such as a room, guest house, a basement, etc. Owner-occupancy is not the only requirement for the Airbnb hosts. Before posting an Airbnb rental, the owner should obtain a business license, register the enterprise, and consult the zoning law​s ​ to determine if such activity is permitted in the neighborhood. Additionally, there are two taxes on the short-term rental income of a total of 14.5​%.​ 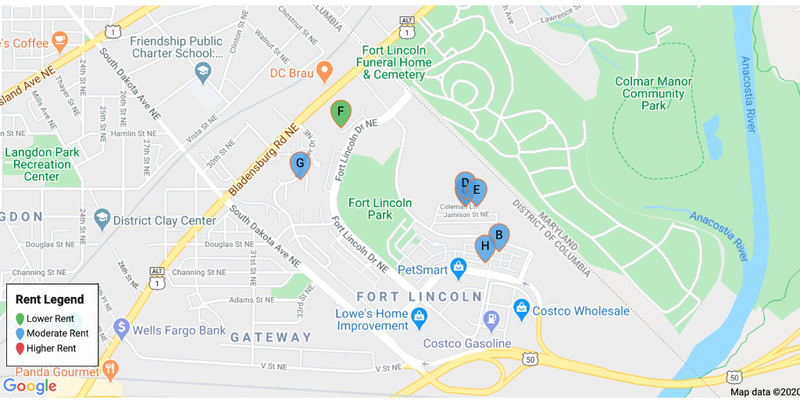 This neighborhood was transformed within the mid-1960s with a residential development called "New Town." It was planned out as an integrated close-knit community with single-family residences. It used to be a secluded sleepy part of town without significant infrastructure, but in 2011 it gained a commercial center, The Shops at Dakota Crossing. It attracted big retailers like Costco and Lowe's. 2010's also marked the construction of new office buildings, mixed use-condominiums, and duplexes.  The exponential growth of Fort Lincoln and the rising inventory of properties attract commuters who desire suburban living, but reluctant to leave the city limits. Their neighborhood has everything for a comfortable life, from a wide variety of retailers to entertainment venues. Among other notable amenities are Lincoln Park, a gorgeous green space with an outdoor pool, tennis courts, and baseball diamonds. 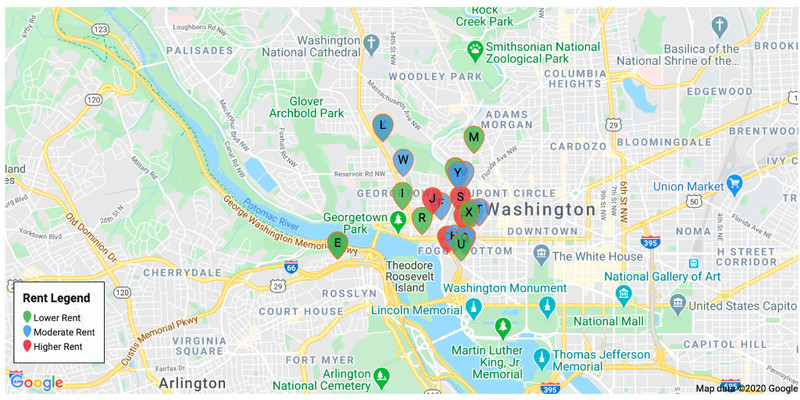 Georgetown was founded way before the District of Columbia and was incorporated into the Federal territory only in 1871. For this reason, it did not follow the classical architectural style of D.C. and preserved its authentic colonial vibe. The area consists of carefully preserved row houses and mansions with modernized interiors. The waterfront has a different look and feels with cobblestone side streets, walkable bridges along the C&O canal, and a beautiful park where you can rent a boat or a kayak, or just take a stroll with your dog. The waterfront part of the neighborhood is more modern with upscale condos and industrial-style lofts. Georgetown is full of well-maintained Victorian gardens that bloom throughout the year.

This area has an abundance of local shops and artisanal boutiques; the signature treat of the neighborhood is the Georgetown Cupcakes. Georgetown also has plenty of bars and cozy local restaurants; it is a primary destination for tourists and out-of-towners to visit. Local streets are busy with traffic, and you might have a hard time finding parking here. 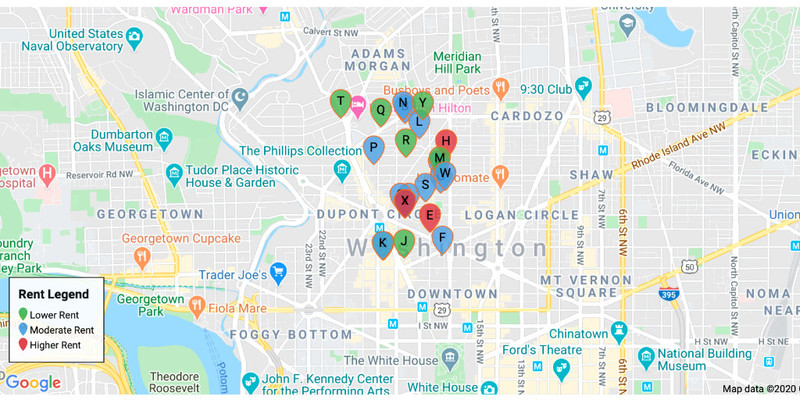 Dupont Circle is a stronghold of government offices, embassies, and think tanks. If you want to reside next to the intellectual elite and foreign diplomats, this neighborhood is right for you. Local homes are typically century-old raw houses, converted into the apartment complexes with three to four units on the floor with a unique layout. Most of the buildings are reconstructed and have contemporary interior and setting. Due to the age of the local architecture, you won't be able to find parking garages and would have to park on the street, which can be pretty crowded. The central location is a magnet for many residents and visitors, and local roads are busy even at night. At the same time, Dupont Circle is one of the safest neighborhoods in D.C., with well-lit streets and frequent patrols. 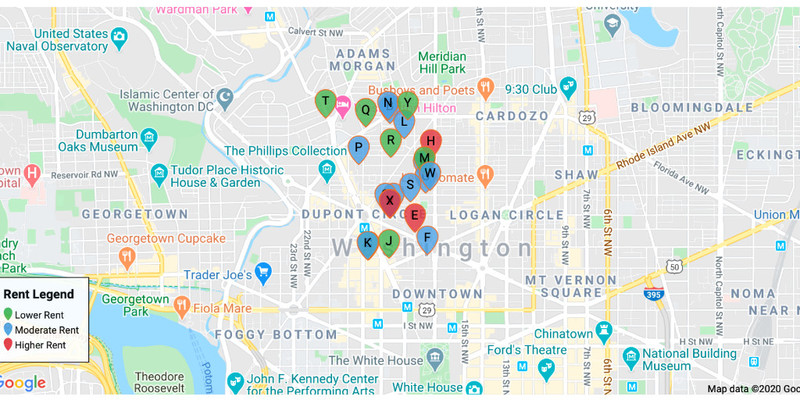 Golden Triangle is the heart of the city that connects Foggy Bottom, Dupont Circle, and National Mall. It has an excellent road system and public transportation with several metro stations, making it a transport hub of the city. It is the epicenter of federal politics, where lobbyists, lawyers, and politicians meet to discuss the current affairs. Golden Triangle is the city's center of I.T., digital marketing, creative industries, and healthcare. Golden Triangle has top-notch offices and one of the best retail and dining experiences on the East Coast. It is one of the most upscale and sought-after business districts in the nation. Around 120,000 people reside here, and an additional 90,000 commute here every day for work. 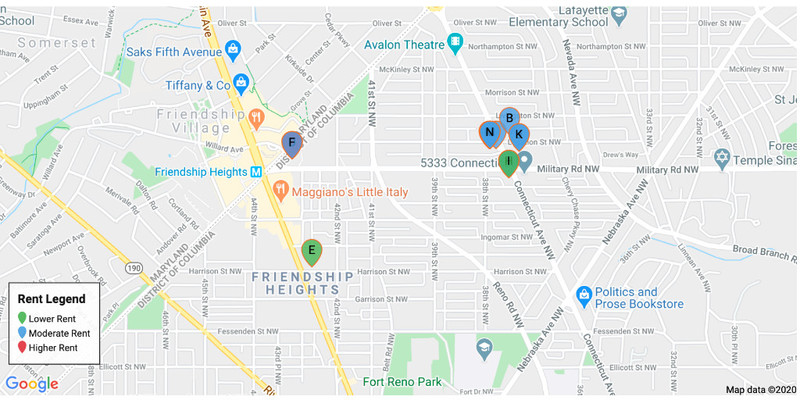 Friendship Height meets all the dream criteria of the young urban dweller. It is a walkable neighborhood with plenty of public transportations nodes, booming retail, rentals in high-rise buildings, and burgeoning social life. Despite all of those sought-after amenities, Friendship Heights is not overloaded with traffic or crowds of visitors. This upper northwest D.C. neighborhood, despite its urban center status, is restful and quiet. When you pass Wisconsin Avenue and go deeper into the neighborhood you will encounter a typical suburb, with single-family homes, green lawns and children playing in the yards. It is populated predominantly by the true locals, not the transient population like the rest of D.C. Residents of Friendship Hills fancy their neighborhood and rally around the local issues. Friendship Height is a high-end area with an average household income of $100,000 and more. 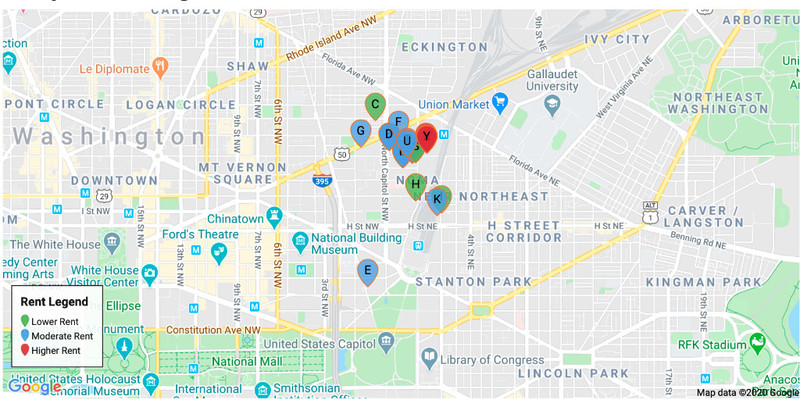 NoMa is a booming neighborhood located just north of the Union Station and U.S. Capitol. Previously a depressed industrial zone, in the last 20 decades, developers transformed NoMa into an energetic community with high-rise offices, luxury condos, and cafes. NoMa is praised as one of the most bike-friendly neighborhoods in D.C., with shielded cycle tracks, bike stations, and a secure bike parking garage. NoMa Business Improvement District regularly organizes events, farmers' markets, arts & craft festivals, open-air film screenings to bring culture to the neighborhood. In the summer, you just need to go outside to find yourself at a jazz concert or international cuisine festival.

About the Author: Mykola Kryvtsun is a content marketer in Rentberry and chief editor of Rentberry Blog and Landlord Tips covering the topics of real estate, public policy, and marketing. He holds a BA in Philosophy and Chemistry from the University of South Florida, where he discovered a passion for writing and exploring hidden connections between business, politics, and technology.