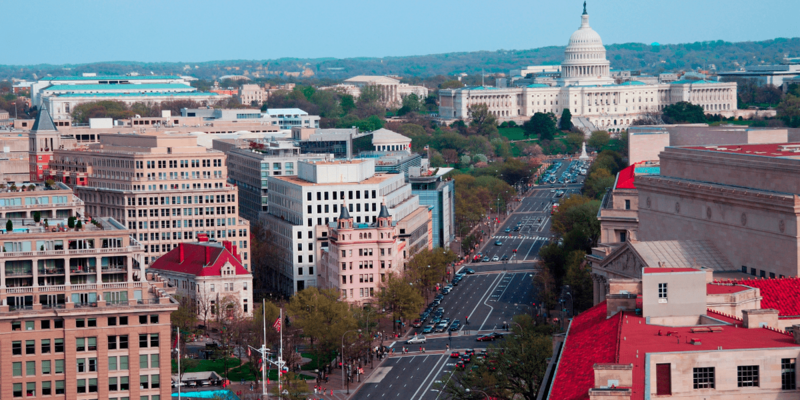 It’s not news that real estate is a business of flux.

People move – all the time! – or choose to rent a house instead of an apartment. Life circumstances call for downsizing or upsizing, and families for whom a duplex was once just fine now need their own detached home. Or vice versa. The only constant in real estate is change, which makes a perfect opportunity to put Rentometer’s rent evaluation tools to work.

We looked at rental markets across 4 main metropolitan areas of the United States:

The bar graphs below show the year-over-year rent amounts in each market. For example, Chicago closed out 2019 with a median rental rate of $2,675 per month for a two-bedroom, 1 1/2 bathroom unit.

Starting in 2020, you would expect a slight rent increase, which we see in January 2020. An investor could see Chicago as a good investment, with year-over-year average rents predicted to be higher for the first three months before leveling in April – a typical seasonal prediction. 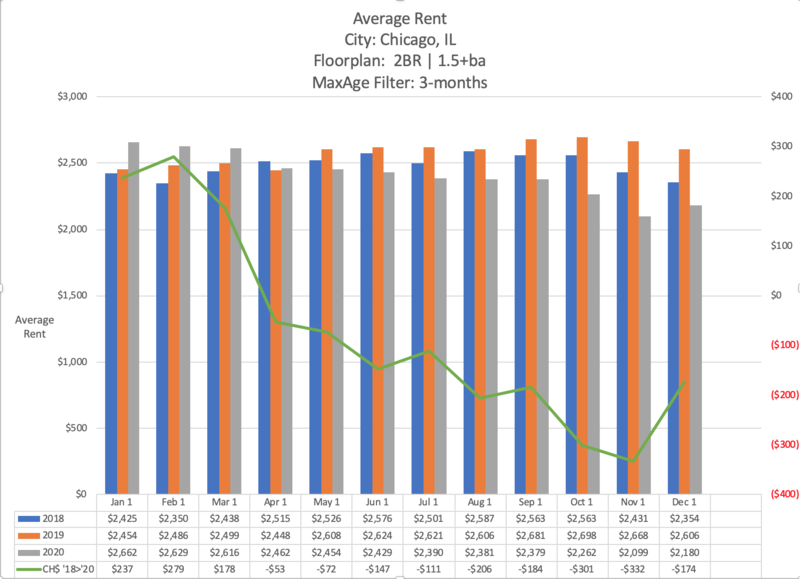 Moving ahead, May’s average rent amount starts to trend down. And if you take a closer look at actual rents paid (the green line), rents held firm until May 1, 2020, after which the number takes a sharp dive.

Some observers may make the case that March and April were not great months because they showed only a slight uptick in rents. And with May’s drop, landlords and investors with models that banked on January rent levels start to worry about cash flow and how to pay the mortgage.

The June data looked the same for Chicago like many other rental areas; the year-over-year rates for May and June declined to under 2019 average rents. The actual rent paid in May lost another $20 on the monthly rent paid while June took the worst and hit another $147 from May.

October took a sharp dive to $436 less than 2019. While the end of the year is finishing up, property managers in Chicago got hit hard with the worst rent rate decrease in November of $569 less than 2019.

Rent loss in Chicago is not the only story. December brings all kinds of good cheer and holiday spirit. Along with that, rental rates increased by $79. Not the holiday bonuses most were expecting, but better than another decline. When looking at actual rents paid (the green line), you’ll see that November and December payments are up from October. Good news for landlords and property managers.

Let’s look at patterns in other metro areas.

How has 2020 treated the real estate market in Los Angeles? 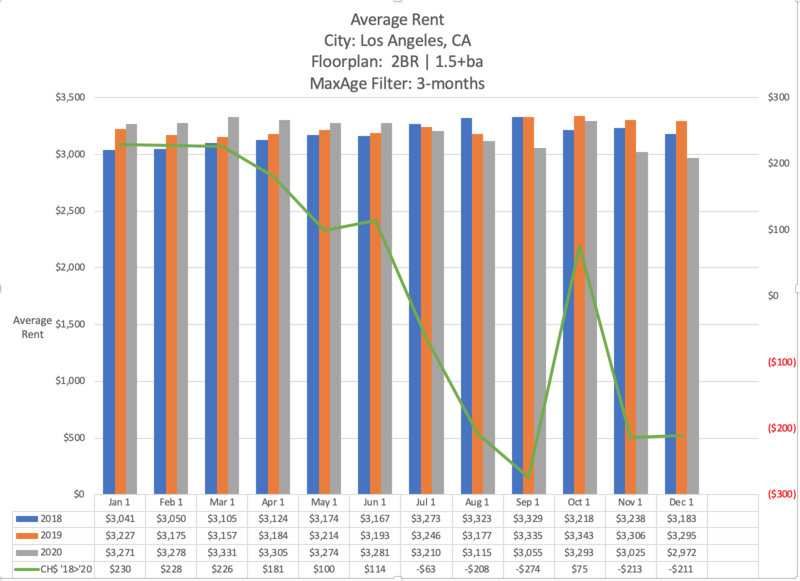 At the end of 2019, average rents in Los Angeles – for the benchmark two-bedroom, 1 ½ bath unit – were right around $3175 per month. Starting in January, rents edged up, $22 higher than December, and $75 more year-over-year. Not too bad. February rates jumped as predicted (blue and orange bars), and the data suggested higher-than-2019 rates would hold through May.

Going into March and April, rents take a sharp dive then had a slight uptick in May. For an investor and landlord, this instability is problematic. It was great to see May on the positive side.

On the year over year, Los Angeles held steady, with June almost coming to a close. The data says that June can be considered a comeback kid in the actual rental rates, slightly. The rental rate rose a little from the May decline.

The July reports for L.A. showed that the rental market is still moderately volatile.

Compared to June, July still lost another $71 on a rent base, and on the year-over-year, July was still down $50 from 2019. The tale of the tape for Los Angeles rents in August and September told the same story with a loss both months, not only the year-over-year but also in actual rents paid. August year-over-year decreased to $63 below 2019. September took a big hit by $280 less than 2019.

October rents had a nice spike in what was paid in rent. The rates for October were only slightly lower than in 2019, at -$48. November and December increased the negativity but stayed almost even for the two months at a -$280 and -$323, respectfully.

What can we learn about the 2020 real estate market in San Francisco? 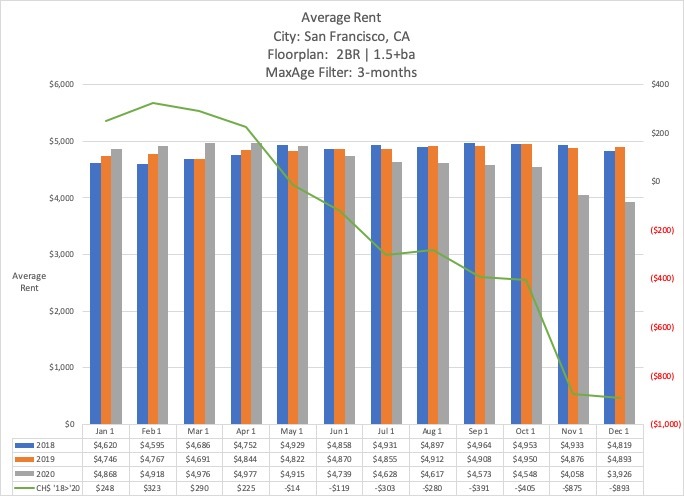 In San Francisco, 2019 ended well. A benchmark unit rented for an average rate of $4,851 per month. All indicators pointed to even higher year-over-year rates going into 2020. This pattern is holding; San Francisco shows up as a crazy anomaly amidst falling rates in the rest of the country. Rents rose steadily in February and showed a massive spike in March.

Even with April rents down slightly, year-over-year levels still rose above 2019. While May rental rates are dropping, you can see these rates still almost dead even with year-end 2019. Overall, rates held their value for the first five months. May held positive on the year over year, but June started to decline and is now sitting at less than 2019 rates. In actual rental rates, both months took a huge hit. They were seated positive in April at $225 in growth, but May turned negative to -$14, and June was sitting at -$119.

The July reports for San Francisco were very similar to Los Angeles. Comparing June and July, the market is still under $111, and on the year-over-year, rents are down $227 from July 2019 to July 2020. August through December in San Francisco did not look good. With a bigger loss in August on the year-over-year being $295 less than 2019. That loss increased each month with September at -$335, October -$402, November a shocking -$818, and December -$967.

Another volatile market in California and one to watch if you are an investor for a possible deal as landlords may want to sell or work out plans with tenants to mitigate loss on your property.

Is the same market fluctuation happening in Washington, D.C.? 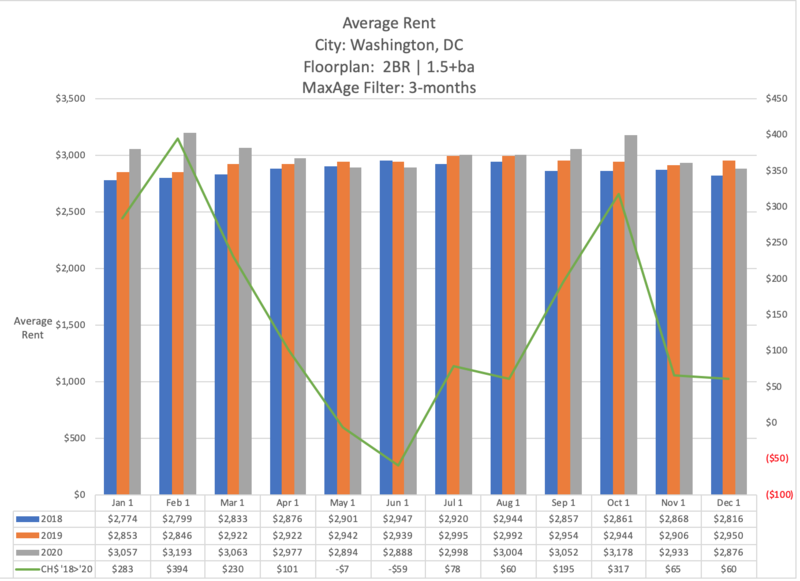 January and February saw nice increases over 2019’s year-end rate of $2,910 per month for a benchmark two-bedroom unit. 2020 showed the predicted year-over-year improvements until May, when rates dipped slightly negative. Actual rent amounts trended down for March, April, and May. Investors and landlords will be watching to see if this trend continues or if the market will bounce back and even see rates that match those from December 2019.

The trend for May and June in Washington, D.C. did not look good on the year over year, both hovering lower than the 2019 rates. And unfortunately, the data on actual payments looks even worse, with rents for May and June coming in at negative numbers.

Washington, D.C., saw a nice comeback for July. The reports show that the month-to-month had an increase of $110 from June to July. This was excellent news as people start to become active in their work and communities again. For July, the year-over-year was also encouraging as July is now neck and neck with a $3 difference from 2019 to 2020.

Which metro areas would you like us to explore?

Get your data by running reports at www.rentometer.com.